The NFB StopMo Studio app for the iPad provides essentially everything you need to jump into creating an animated film. You won’t have any issues getting comfortable with the user interface if you’ve worked with animation programs before, and it seems more than approachable for newcomers young and old. Once you open up the program, you’re welcomed with a short and succinct tutorial that covers the basic tools, and then opens up to allow you to explore the rest of the options available. 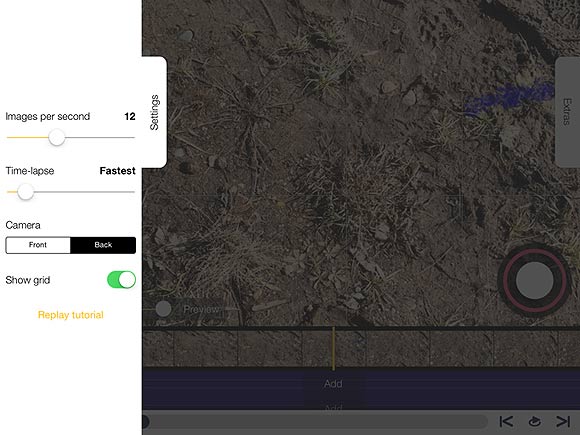 Many of the tools in the app are customizable to a healthy degree. The camera can be set to a time-lapse mode ranging from two pictures per second all the way up to a photograph per day (the latter is a little absurd, unless you plan on setting your iPad on a windowsill for weeks), and it also functions normally as a touch-activated camera. The frame rate of the animation can be set anywhere between 1fps to 30fps.

You can create, modify, and save a seemingly endless amount of brushes to draw with, with a surprising amount of variability. Unfortunately, the brushes are not pressure sensitive, but being able to draw directly over stop motion photography created in the same application is an impressive ability that I haven’t seen elsewhere. 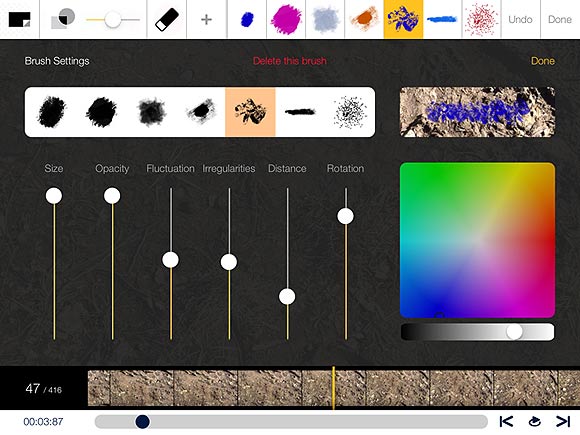 If you’re into rotoscoping, there is a wealth of experimentation available. You’ll have to stick to drawing over time-lapse or standard stopmotion photography since importing a video file directly into the app to draw over isn’t supported. Alternatively, if you want to just create hand-drawn animation on a flat color background, you can do that too. There is also an onion skin that you can turn on to varying degrees of brightness, but you’ll only be able to see one previous frame while animating.

You can record up to four separate audio tracks within the app, basically doing live foley while the program plays back your animation. If you’ve got some music you’ve already created in your iTunes, you can import that directly into the audio tracks. You’ll be able to do a minimal amount of mixing, such as simple fade-ins and -outs in combination with a maximum volume control. There are over 40 preset sound effects available that you can insert into any frame of your animation, independent of the audio tracks. They’re pretty cookie-cutter sound effects, but if you’re not too picky, there’s plenty of fun to be had with them. 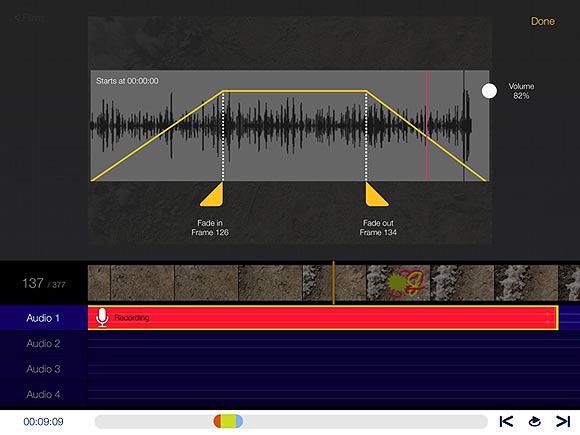 As far as editing goes, you can cut, copy, paste, and delete single or multiple frames at any point along your timeline. Also, while importing video is not available, you can import individual photos from your iPad camera roll into the timeline. There is a set of customizable inter-titles available, but I would personally opt to just animate the title sequences and credits through stop motion or hand-drawn techniques. Once you’ve finished your film the app exports it as a 1024×576 MP4 file, which can be saved to your iPad, emailed, or airdropped to anyone nearby.

The only feature that I think the app is really lacking, as a tool designed for stop motion, is the ability to take a photo remotely. I’ve come across a few other animation apps where can you activate the camera by voice, or by using a remote app from a smartphone. If I was animating alone with clay or other messy materials, I wouldn’t want to have to smudge up the iPad’s screen every frame. Being able to take a photo remotely would also speed up the animation process.

NFB StopMo Studio is a powerful tool at an unbeatable price ($0.99). I’ll definitely keep using it for small and quick experimental projects during travel. It’s not going to replace any of my other equipment, but it’s a portable and versatile tool to add to the arsenal. I think its greatest impact lies in its potential as a teaching tool. I’ve taught animation to kids in the past, and I wish I would have been able to share this program with them. It can be pretty difficult to explain every step that goes into making an animated film to a young audience. NFB StopMo Studio simplifies the entire process wonderfully, to a point where an iPad savvy child can become comfortable using it on their own after a few lessons.

Here is an example of a short created with the app by Patrick Bouchard (Bydlo):