Back in 2011, when kids’ Youtube was a less crowded place, a young Dutch animation graduate decided to take a chance on the platform. Uninspired by Youtube’s existing preschool shows, which he found unfocused, Arthur van Merwijk launched his own series with a simple concept: a girl named Mila hangs out with her pet Morphle, a creature that can morph into whatever Mila dreams up.

A decade on, My Magic Pet Morphle has morphed into a success not even van Merwijk could have dreamed up. Its channel has close to eight million subscribers and more than five billion views — and that’s just on Youtube. Since its acquisition last year by Moonbug, a company that acquires and develops kids’ content, Morphle has reached other platforms, including Netflix and Amazon Prime.

Van Merwijk has stayed with the series throughout. He started out making episodes essentially alone. Today, he retains creative oversight, working closely with a production team in Amsterdam. The acquisition by Moonbug, which is based in London and L.A., didn’t really change how the show is made. But the company is swiftly expanding its reach and developing its IP: Morphle toys will soon go onsale.

Youtube is a notoriously fickle platform for creators. How did van Merwijk produce such a hit? As he tells Cartoon Brew below, it took a combination of luck, creative intuition, data analysis, and programming…

Van Merwijk: Morphle had a double start. First, in 2011, it started as a nursery rhyme channel. I’d just come out of animation school at the time, wanting to create animated children’s shows similar to the ones I grew up loving. So I felt it would be a fun side project to start a Youtube channel for that audience. Most kids’ channels at the time were somewhat random collections of animated songs and videos that had no common thread.

That’s why I came up with Morphle, who could transform into different versions of himself in each video. In the video for “The Wheels on the Bus” he could be a bus, and in “Itsy Bitsy Spider” he could be the spider. That way I felt the kids would have a play friend that would take them along through all the songs. I was inspired by Barbapapa, who I loved as a kid, as well as a Dutch comic book called Oktoknopie.

It was only in 2015 that the show in its current “tv-show format” came about. I hadn’t given much attention to the nursery rhyme channel for a while, as I was looking to produce shows through more traditional platforms. But one day it hit me that I already had the audience, and that I could produce and distribute a show myself through the Youtube channel.

To my knowledge, Morphle was the first preschool channel on Youtube that really approached the videos like they were episodes of a traditional tv show. Most of the other channels at the time were about songs, educational videos, or toy unboxings, or they were uploads of shows that were originally produced for tv. From the moment I made this change to the channel, Morphle’s popularity really started taking off.

“I produced every episode by myself for about a year”

Morphle started with no resources at all, except for the people who worked on the videos. For the original nursery rhymes, the music was done by my sister, who’s a professional singer. I drew the characters myself and the rig-animation was done by a great friend of mine, Daan Velsink (who is now the showrunner of the cg preschool show Dr. Panda). Nobody got paid upfront. We all just shared the profits from the videos.

When I later started the tv-show-formatted episodes, I actually did everything myself. The backgrounds, characters, animation, and even voices — with the very important help of my girlfriend, who did the female and kids’ voices. This was a lot of work, but it was a really fun time.

Even though I went to animation school, I am more of a producer and writer/director than an animator, character designer, or background artist, so the quality of the first episodes was pretty low from a technical perspective. One of the biggest challenges was the mental barrier of putting content out into the world that you feel doesn’t have enough “quality” yet. But I felt I had no other way to build a show than to do everything myself, and to focus on those elements that were most important to the kids. Quality for them isn’t about every frame being perfect — it’s about the playfulness and imagination of it all.

I produced every episode by myself for about a year, saved up, then invested all the money I made from those videos (very scary) to set up a studio here in Amsterdam. I hired animators and artists, to up the quality of the episodes and start producing more per month. 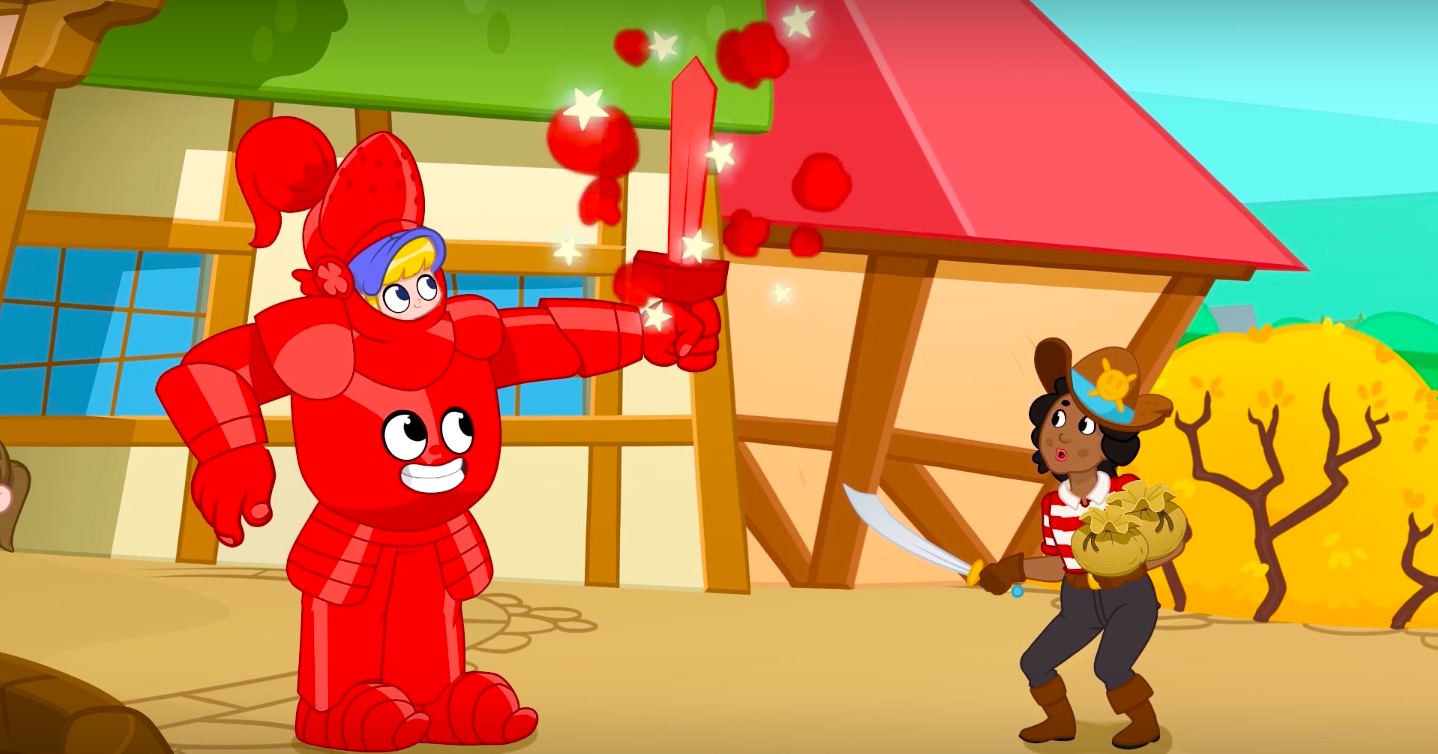 An important strategy on Youtube is that you need to find a way to produce a lot of content while keeping your audience engaged. This is of course difficult for animation, especially when you start out with no resources.

In Morphle’s case, we had to develop our own workflow that focuses on producing episodes much faster than you normally would on a show like this. I got a programmer onboard who programmed in-house software, which allowed us to produce episodes faster. That all paid off. One person at our studio now storyboards and animates a four-minute episode by themselves in one week.

This workflow isn’t fitting for every animator. The animation schools in the Netherlands have historically been very focused on training generalized animators instead of specialists who focus on a certain part of the process. Also, Dutch culture is quite independent-minded.

The combination of these two factors has been a downside for certain aspects of the industry, but it has been great for our workflow. Our two main writer/director/animators, Mark Bastiaan and Danne Bakker, have been creating their own Morphle episodes in a very independent way for a long time now. They were key to developing the Morphle world.

“Too much preschool narrative content follows too rigid a story structure”

This surprises a lot of people, considering some of the counterintuitive kids’ channels that have become popular, but with Youtube, the main thing to focus on is the content of your episodes. There are a lot of complicated theories out there about the algorithm, but if the kids or their parents just keep playing your videos more than the alternatives, Youtube will promote them. The main strategy was just creating fun and exciting episodes, inspired by children’s play and the themes and emotions that I feel resonate with kids.

I think the main reason for the show’s success is the idea that Morphle is make-believe come alive. When Morphle morphs into anything that Mila can come up with; that’s really what children’s play is all about. Imagining you are a giant robot, or riding around on your dad’s back, pretending he’s an elephant.

I’ve always felt that so much preschool narrative content follows too rigid a story structure, modeled on productions aimed at grownups and older kids. For those audiences, structured storytelling is super-important, but when young kids play it’s an intuitive chain of things happening. That’s where we’ve tried to get our inspiration from, and I think that’s one of the reasons we outcompete more traditionally structured shows.

“When the data shows that a certain theme is popular, we try to understand why”

What kids enjoy might not always be what grownups expect, so it has historically been a challenge for creators and buyers to connect with what young kids want to see. It’s been very interesting to me to see Youtube democratize this process. We no longer have to guess what kids like. If they really like it, Youtube will show it to a larger audience.

Nowadays Morphle is being watched on many different platforms, like Netflix and Amazon Prime. But it started on Youtube, where you have constant feedback on which episodes do well and which don’t. And although that’s one of the great powers of Youtube, it is also important not to get lost in only the numbers, as that way the show can lose its soul.

When we notice in our data that a certain theme is popular with the audience, we always try to understand what kids enjoy about those themes, by watching the play of real-life children in our families, but also by returning to our own childhood memories.

In the end these are millions of real kids watching the videos we make, and that’s the most important part. The most rewarding moments in the Morphle journey have been seeing pictures of kids all over the world dressing up in homemade Morphle Halloween costumes or throwing Morphle-themed birthday parties.

We were lucky that when we started the channel in 2011, competition was quite low on Youtube. That being said, kids’ Youtube in general was not as big as it is now, so it still took many years to build the channel up to a couple of hundred thousand subscribers. In 2016, the popularity of the channel exploded to millions of kids in a couple of months. The main change came when I started the storytelling format and set up the studio to produce many more episodes per month.

I think it would be a lot more difficult to start an animated channel from scratch right now. There is so much competition out there, and some of it has very high production values. To compete now, I think you would have to spend a lot more money right away, while having little time to test your characters and concepts.