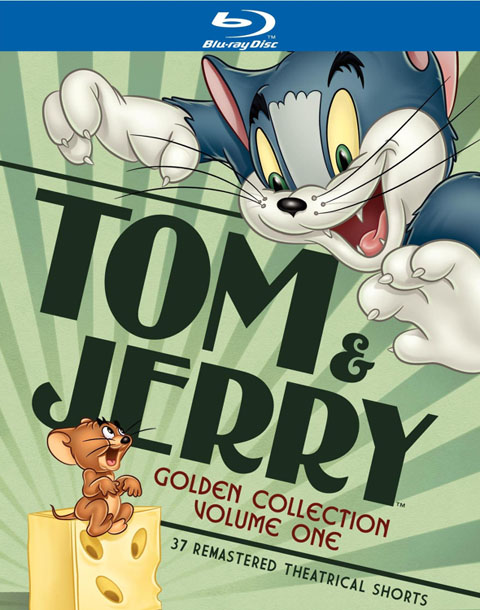 Buzzing about the internet today was news concerning the Tom and Jerry Golden Collection, Volume 1. Whereas I’m working on this set and had been sworn to secrecy about it, I couldn’t mention it before. Since the box art was leaked and a bunch of mis-information is now being spread, I have no choice but to violate my arrangement with the studio and clear up some facts.

First of all, some basic information about this set: It goes on sale October 25th on both Blu-Ray and standard DVD discs. The DVD will go for $26.99 and will present the cartoons in their original 1.33:1 “full frame” video aspect ratio. The Blu-Ray set will cost $34.99 and will feature the shorts also in the original 1.33:1 aspect ratio, but with video in 1080p high definition. Both will no doubt sell for less on Amazon.

Each set will contain the first 37 Tom & Jerry shorts, in chronologic release order (from Puss Gets The Boot to Professor Tom, for those keeping score at home). There will be audio commentaries and bonus documentaries – but none of these are finalized yet. These sets will contain new, pristine transfers from CRI negative elements. These are not the Turner TV broadcast prints used on previous releases.

Many are asking about Mouse Cleaning. The original nitrate negative has been found on this rare title and it is being restored at great expense. This film is planned for release on T&J Golden Collection volume 2. Don’t even think of asking me about that set yet.

The information leaked about Vol. 1 today was early data made available to solicit sales from the retail trade. It was not intended to be spread publicly. A formal press release about the Tom & Jerry Golden Collection, with updated information, will be released in a few weeks.

P.S. I will be moderating a Warner Home Video Cartoon panel on Thursday July 21st at 3pm at the San Diego Comic Con – with guest panelists including George Feltenstein – to discuss forthcoming Tom & Jerry and Looney Tunes collections on DVD. If you are going to the Comic Con, I advise you (wink, wink, nudge, nudge) to attend this panel for more information.

(Special thanks to David Lambert)