It may be exposing weaknesses in our society, but the coronavirus is also bringing out the best in artists. As the crisis deepens, animators and illustrators are responding to it with inventive home-made works, whether out of boredom, a sense of social duty, or a flourishing of inspiration in turbulent times.

We’re republishing an entirely subjective selection of coronavirus art below. If you’ve spotted a work that you think belongs here, let us know in a comment at the bottom of the page or on our social media accounts.

Dave Stofka, a freelance animator and website developer living in Ohio, created an affectionate parody of classic sitcom Laverne & Shirley, replacing the characters with his state’s governor Mike DeWine and health director Amy Acton. At the time of writing, the video has clocked up almost a million views on Youtube and over a million on Facebook in two days:

After Canada’s Prime Minister Justin Trudeau delivered a speech about children’s role in the crisis, marketing manager Tyler Walsh reinterpreted it in Lego animation. He posted it on Twitter, and the prime minister promptly replied: “I think my kids — and a whole lot of others — will get a kick out of this”:

Last Month during one of his press conferences, @JustinTrudeau had a message for Canadian children about how they can do their part in the fight against #COVID19. It's a powerful statement, one that deserves a version all kids will want to watch. #StayHomeSaveLives #LEGO pic.twitter.com/7r4rMX6tax

In the U.K., the government is appealing to the public to keep donating blood during the crisis. Animators responded by creating this short anijam, which animator/illustrator Knifeson Yu posted on Twitter:

made this little animation coop ☺️✨happy to be part of it.
———- Covid-19 has caused a steep decline in blood donations.
Please visit https://t.co/1yao8wxdpa now to locate your nearest centre and find out how you can donate.#KeepDonating pic.twitter.com/sJ3yxrpTRq

Meanwhile, 23 artists based in Mexico and Colombia joined forces to created the illustrated book The Day When Everything Stopped, which explains the crisis in terms children can understand. The book was a hit in Spanish (online version or PDF), and has since been translated into multiple languages, including English — discover it here. The book is not copyrighted. The project was coordinated by Pixelatl, a platform for artistic exchange and creative development in Latin America. 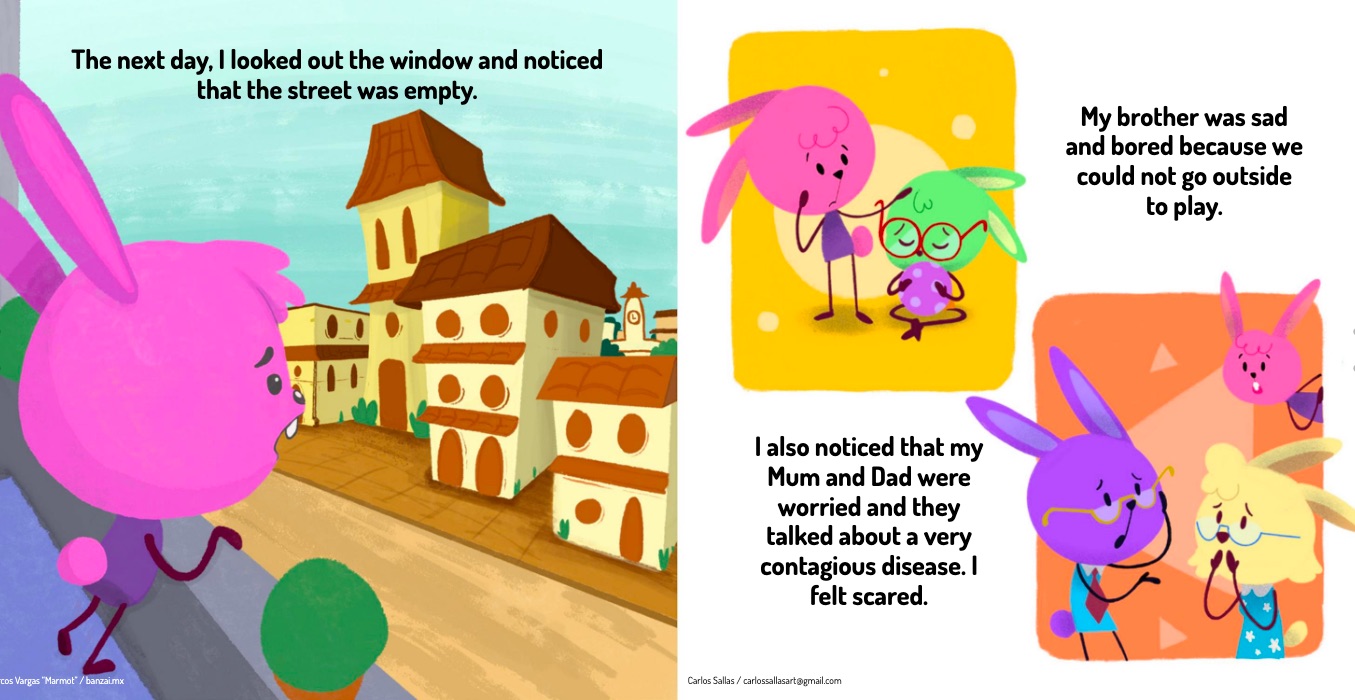 Illustration at top of article: Artwork by Oscar Pinto for “The Day When Everything Stopped.”