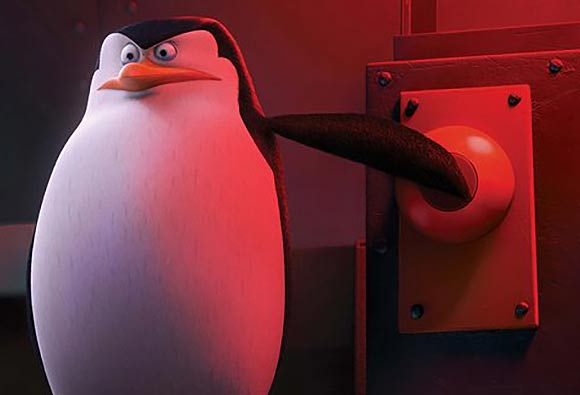 This weekend DreamWorks Animation’s Penguins of Madagascar hit an ignominious milestone: on Friday, its 17th day of release, its domestic gross was surpassed by the Rise of the Guardians, the notorious DreamWorks underperformer that was released at the same time in 2012. Adjusted for inflation, the Penguins audience is even smaller than Guardians’s audience.

Penguins added an estimated $7.3 million in its third weekend, lifting its domestic cume to $58.8 million. After the same length of time on the bigscreen, Rise of the Guardians had grossed $61.8 million. Other recent DreamWorks entries had also earned more at this juncture in their theatrical runs: Turbo had banked $69.3 million and Mr. Peabody & Sherman had snatched $83.3 million.

It’s unlikely that anybody at DreamWorks would have predicted a few years ago that one of their tent-pole franchises would bomb so badly with American audiences. These type of spin-offs and sequels used to be DreamWorks’s bread-and-butter, but American filmgoers have made themselves heard loud and clear: NO MORE FORMULA DREAMWORKS FILMS. As Jeffrey Katzenberg’s house experiences unprecedented creative turmoil, the meager grosses probably haven’t bottomed out. The studio’s next feature, Home, which is being promoted with urine-drinking gags (because what better way to attract family audiences than urine drinking?), has bomb written all over it.

The fate of Penguins isn’t nearly as dire overseas; the film scored an additional $14.7 million from international territories, pushing its foreign cume to $116.7. Its global gross now total now stands at $175.5 million.

With a $6.1 million haul, Disney’s Big Hero 6 earned just a million less than Penguins, even though it’s been in theaters twice as long. After six weeks, it has grossed $185.3 million and is now guaranteed to reach $200 million. The Disney-Marvel collab also earned $3.9 million from international territories, boosting its overseas take to $68.2 million. The film is still awaiting release in most of its international territories.

Other box office notes: the top-grossing film globally was the vfx-driven The Hobbit: The Battle of the Five Armies amassing $117.6 million from 37 markets. And Paddington, a film with a CG lead, made $11 million this weekend and its global total is now $45 million.