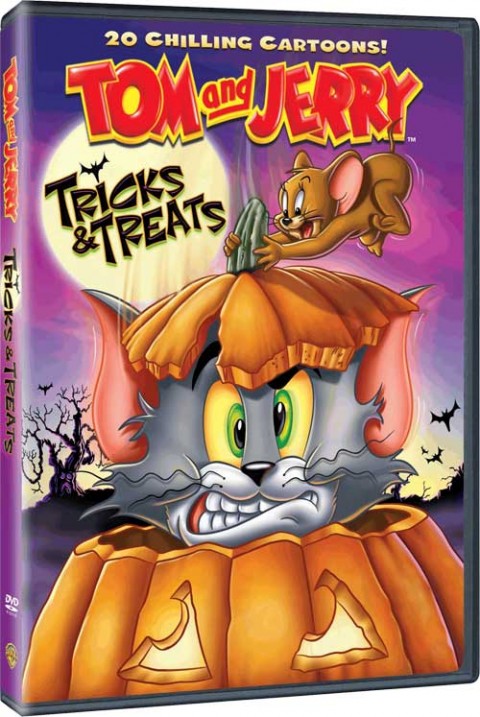 IT’S CHILLS AND THRILLS THIS HALLOWEEN WITH EVERYONE’S FAVORITE ANIMATED CAT AND MOUSE DUO IN TOM & JERRY: TRICKS AND TREATS

BURBANK, CA (July 30, 2012) — Get set for a ghoulishly good time with that tussling twosome, Tom and Jerry as they scare up some fun for the whole family this Halloween with their latest DVD release, Tom & Jerry: Tricks and Treats, available September 4, 2012 from Warner Home Video (WHV). This “spooktacular” collection showcases 20 Tom and Jerry cartoons plus two bonus cartoons. Tom & Jerry: Tricks and Treats will retail for $19.97 SRP.

Tom and Jerry are in for spooks galore in this monster collection. With 20 eerie cartoons plus two bonus cartoons, everyone’s goodie-bag will overflow with fun! Tricks and treats are at every turn, from ancient Egypt to Transylvania, from creepy houses to haunted forests, the hair-raising hilarity is non-stop! Our favorite Cat and Mouse mingle with ghosts, mummies, werewolves and witches in these terrific tales. Of course Tom and Jerry have a bounty of tricks up their own sleeves as well! Fear not, the chase is on! It’s a “scare-iffic” good time for the whole family!

In Over the River and Boo! The Woods, Tom and Jerry find themselves lost in a haunted forest. Tom leaves home to become a witch’s companion in The Flying Sorceress. In Haunted Mouse, Tom is put under a spell by Jerry’s magician uncle. Jerry meets a bat who looks just like him and together, they trick Tom into believing the bat is Jerry’s flying ghost in Bats What I Like About the South. Legendary monster hunter, Van Helsing, chases after Tom when he’s transformed into a werewolf in Monster Con. In Which Witch, Tom is a servant to a witch who needs a mouse to complete her magic potion. Jerry discovers the secret tomb of an ancient Egyptian cat in Tomb it May Concern. In Spook House Mouse, Tom and Jerry find themselves in an abandoned fun house where they embark on a rickety ride featuring lots of spooky attractions. These and several other “fang-stastic” shorts are featured in the collection.

“With over two hours of hilarious cartoons, Tom & Jerry: Tricks and Treats is the perfect seasonal DVD title to inspire the spirit of Halloween in the whole family,” said Mary Ellen Thomas, Vice President of Family and Animation Marketing and Partner Brands. She added, “Tom and Jerry cartoons are timeless and appeal to a broad audience, especially to kids. This collection consists of Halloween-inspired themes and celebrates everything that is fun, playful and whimsical about the holiday. It’s a great mix of classic theatrical shorts and newer cartoons too and a must-have for Tom and Jerry fans.”