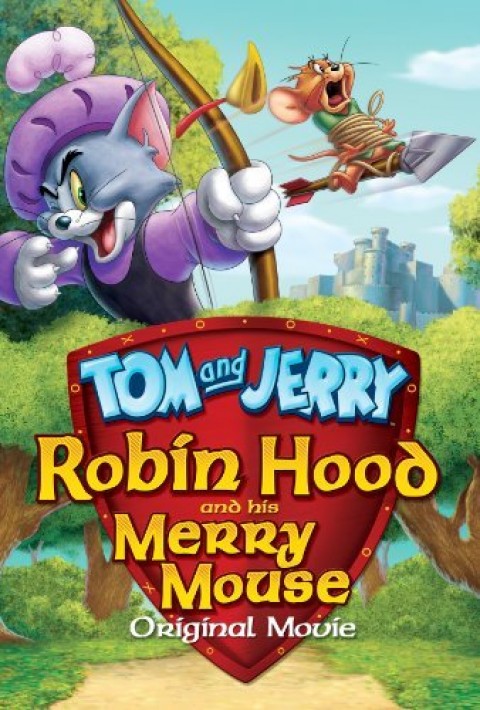 BURBANK, CA (August 9, 2012) – The beloved tale of the mythical hero, Robin Hood serves as the setting for Tom and Jerry’s latest adventure in Tom & Jerry: Robin Hood and his Merry Mouse, an all-new, original, animated film from Warner Bros. Home Entertainment Group, set for release October 2, 2012. Tom & Jerry: Robin Hood and his Merry Mouse will be available in both high-definition Blu-rayâ„¢ for $24.98 SRP and standard DVD for $19.98 SRP. The Blu-ray edition will be sold in a combo pack which includes both the Blu-rayâ„¢ and DVD editions of the film. Both editions will include UltraVioletâ„¢.

A fresh take on the classic story, Tom & Jerry: Robin Hood and his Merry Mouse is an action-packed family film filled with laugh-out-loud moments and fur-flying exploits that only our favorite cat and mouse duo can deliver! The tussling twosome are at it again, when Jerry, as the smallest member of Robin Hood’s gang encounters Tom, a feline squire to Maid Marian. Not only are the cat and mouse from opposite sides of the moat, but Tom is secretly working as a spy for the Sheriff of Nottingham and evil Prince John. But when the villains succeed in capturing Robin, Tom realizes to his horror that they intend on harming Marion as well. So he joins forces with Jerry, not only saving their respective humans but allowing for the safe return of King Richard as well.

“When you combine two great classics such as the timeless tale of Robin Hood and the lovable antics of Tom & Jerry, the result is Tom & Jerry: Robin Hood and his Merry Mouse, a brand-new, must-see film that kids and adults will love to watch time and again,” said Mary Ellen Thomas, Vice President Family & Animation Marketing and Partner Brands. She added, “This movie is a great companion to Tom and Jerry & the Wizard of Oz and Tom and Jerry Meet Sherlock Holmes, two original films which were also based on classics and were a hit with fans. We are delighted to offer consumers a fresh take on these legendary tales.”